Music of Mediation Chapter One: “Silence is Golden”

Could the legal profession contribute more to Scottish society?
28/11/2022

“Silence is golden, but my eyes still see”

1967 was the year I really became aware of popular music. One of my earliest memories is of this number one song by British pop group, The Tremeloes. They were initially The Tremoloes because of a spelling error and were chosen, after auditions, by Decca Records in 1962 in preference to another emerging band known as The Beatles. "Silence is Golden" is a typical ‘sixties song, originally performed by Frankie Valli’s Four Seasons. The melody and the harmonies can still send a chill down your back.

The Tremeloes had been in transition. Lead singer, Brian Poole, had left. Vocals on this song were handled by guitarist Rick Westwood and Len “Chip” Hawkes (whose son Chesney had a number one hit many years later with The One and Only, a great pop quiz question for a certain generation). They rather fell away as the Sixties expired but you can still catch Len Hawkes and Brian Poole on one of those music cruises at sea that are now proving popular.

The Tremeloes are also responsible for one of the best song titles for those feeling miserable: Even The Bad Times Are Good. For some reason, this evokes memories of a late summer weekend family break in the Scottish seaside town of Largs – it must have been on the radio then!

In a frenetic world, where noise seems perpetual and peace is always at a premium, the idea of silence is a precious one. Spiritually, silence is a feature of many religions, a pause to meditate, to reflect on the vast and incomprehensible, or to contemplate the immediate and present. “Be still….”. But mostly, we abhor the vacuum of silence. We find it difficult to maintain silence for long. It can seem embarrassing or unnerving. We are aware not only of our own discomfort but that of others too. We feel the urge to do or say something.

Somehow, despite the discomfort, we need to learn to sit tight. Hold the moment. Formulate your words carefully. Digest what they said. Think. Process what you have heard. Let them think. Let them reflect. Let them speak. Pause after they do. Create space. Give yourself time to breath. Let them speak again.

“My eyes still see”. Watch the others too. Not with some sort of forensic stare, but with interest, curiosity, compassion. What signals are they sending? If, as we are told, 55% (or at least a substantial proportion) of a message is in what we see, body language if you like, what are they telling us in their eyes, facial expression, posture, gesture, mannerisms, movement? Some call this “leakage”. That could seem rather judgmental and psychotherapeutic. Why not just consider this to be an opportunity to use what you see to try to understand, really understand, what they are saying or thinking, in order that you can respond competently and thoughtfully?

Holding a pause, letting silence prevail, may take conscious discipline. Be aware of the silence, resist the urge to say or do, count to five, breath out and in a few times, know that resisting the urge to intervene can be a gift to others. Listening in silence for say two minutes is quite an exercise, and worth practicing. We often do it in our mediation training course, with permission to speak only granted by the giving of a signal, such as passing a pen from speaker to listener. No pen, no speak.

Once upon a time, I ran a short series of workshops entitled The Power of the Pause. It’s a great phrase – and a reminder that a lot can happen when nothing is apparently happening. Here is a summary slide: 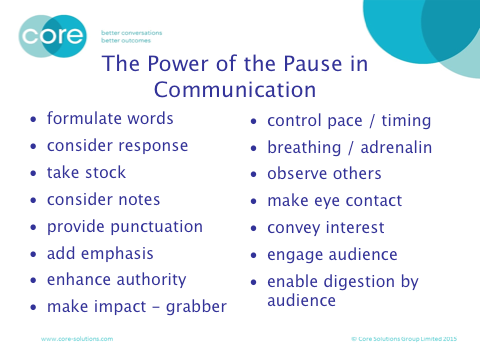 The silence was palpable. Saying nothing is hard enough in normal circumstances. It’s doubly hard when sitting alongside the key players, the client negotiators, in a mediation, watching them inch towards a better understanding of what they need to do to achieve the deal they know they need to get to.

The clients had been in a contractual dispute for a number of years. Once upon a time, they had been good friends and business partners. The business climate had changed and two had broken away and formed another business. Their erstwhile colleagues alleged they had unlawfully diverted contractual work from the original business. As often happens in these sorts of situations, the two had claimed in return that they were entitled to payments withheld from them. The atmosphere was far from friendly.

As mediator, I found myself ostentatiously picking up my water glass and sipping from what little remained of the contents. I looked out of the window. Made eye contact with my assistant, who was watching her first full commercial mediation. Feigned writing some notes. It was so obvious, to me, what they needed to say. But they needed to find the words, not me.

And they did. From a position of complete impasse, they gradually challenged and then removed the assumptions which each had made and which had informed their legal advice, spawned two litigations and produced hundreds of pages of forensic accountancy analysis.

They learned that neither had “duped” the other, as one party had earlier suggested. For example, the provisions in the company accounts were nominal and payments recorded there had not in fact been made, contrary to the belief of the other party. They and their respective companies had not benefited unfairly from the efforts of the other. They agreed that each faced financial ruin if the cases proceeded to the several weeks of a court trial to which they were heading. The scales fell away as they learned from each other what had actually happened with the contracts.

Why hadn’t they talked? They were too busy, had more urgent things to do. Trust had broken down. They had quickly defaulted to seeking legal advice. That advice had included not to talk to the “other side” lest they compromised their positions.

The return of this kind of autonomy to the clients as decision makers is, I believe, one of the most important contributions that mediation can make. Perhaps too often, clients have tended to defer to legal advisers, and the lawyers understandably (but perhaps in a rather paternalistic way) have assumed responsibility. But lawyers can confidently let go in situations like this. They, and the mediators, need to liberate the clients. They, and we, need to listen to them and let them work it out, remaining silent. Indeed the words listen and silent contain the same letters – thank you, Alfred Brendel. What an appropriate transition to the next chapter.