Your Truth, My Truth and The Truth

Reflections on mediation in practice and bringing parties together.
01/06/2022

The story of the blindfolded people who each approach an elephant from different angles (shown in the image below) is a good illustration of how multiple truths can exist depending on the perspective you take. Different views can often be the starting point for disagreements. Mix in a few cognitive biases and things can quickly escalate, for example, as evidence is sought to back up an initial conclusion (confirmation bias) and the behaviour of others is interpreted to be a reflection of their underlying character, regardless of context (attribution error). 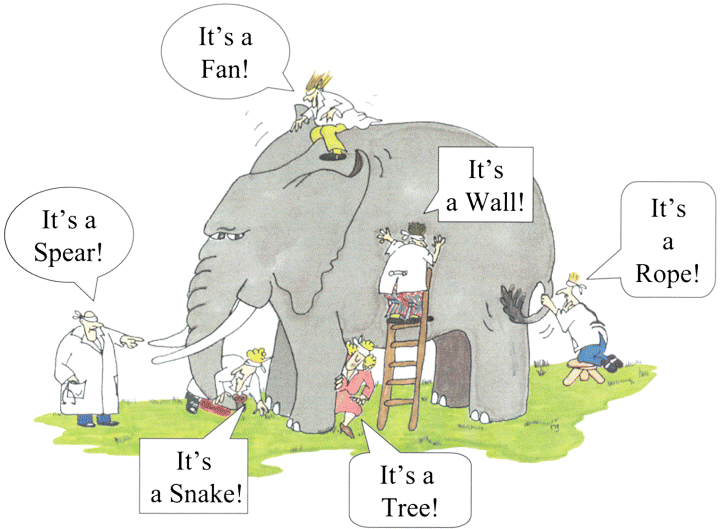 (Thanks to the artist G. Renee Guzlas)

Cognitive biases are all around us and are entirely normal. They are a key feature of our evolutionary make up and were critical to our survival when energy was at a premium, danger was all around and being able to trust close neighbours was vital. Because the biases existed to speed up our decision-making at times of danger, in the not so distant past this could often be the difference between life and death.

As the environment in which we live is now dramatically different from the one in which we evolved, it is important that we develop a fuller understanding of how these biases might be influencing our current approach to events and our decision making. They still apply even if danger is only social rather than physical.  Psychologist Daniel Kahneman, in his book ‘Thinking Fast and Slow’, provides the most comprehensive exposition of the role that cognitive biases can play. Along with his colleague, Amos Tversky, Kahneman identified many of the most influential biases. He was awarded the Nobel Prize for Economics for the insights this work gave to how people make decisions in practice.

At the recent Chartered Institute of Arbitrators’ annual Mediation Symposium in London, Ken Cloke and John Sturrock discussed some of the biases that can have most influence on conflict and its resolution. These included:

These are just the tip of the iceberg and they give a flavour of the influence bias can play. See Rolf Dobelli’s The Art of Thinking Clearly for more.

In many ways, the process of mediation offers the opportunity to engage the ‘slow’, energy-intensive, thinking that is more rational and is needed to counter some of the biases resulting from intuitive ‘fast’ thinking. It can allow parties to a dispute to better understand issues and how they appear from different perspectives, it offers the opportunity to bring the different perspectives to bear, to try to explore options to increase the size of the pie before trying to distribute it, and it can help reality test possible ways forward.

The role and skills of the mediator in the process are critical as well. Ken Cloke offered a number of helpful examples of what can be done to both build on and address biases. These included:

By their very nature, cognitive biases will always be with us and thinking fast often serves us well. The more we’re aware of the downsides, the more we can be on guard for when they might be getting in the way and when it might be time to slow down and think slow.